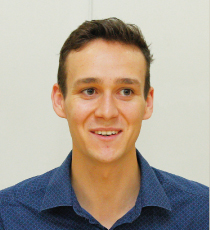 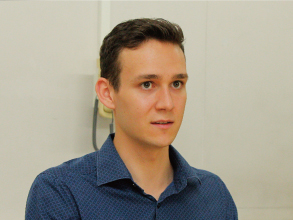 Q Tell us something about your research.

I am doing research in probability theory. This is a branch of mathematics that is generally used in making financial forecasts, such as predicting stock prices and calculating insurance premiums. I’ve been studying probability theory since I was in Germany. I really like the study of probability because it can be applied to so many different daily situations. I learned about the Poisson process while at Mannheim University.
Using the Poisson process, we can make observations about events that are unpredictable. For example, assume that some product is being manufactured on a production line in a factory. During production, there is a certain probability that a product will be defective. The occurrence of defective products, which is not foreseeable, occurs stochastically at discrete intervals that are referred to as “jumps.” The Poisson process makes it possible to obtain the probability of occurrence of such jumps.
Learning math requires unflagging patience. You start with what you don’t know, and build understanding bit by bit over time. In that respect, it resembles studying a language. With both math and language, the joy and sense of satisfaction that you get is a result of the effort that you put in.

Q Please give us a message for other students who are considering enrolling in Waseda’s exchange program.

The degree program is in English, and I highly recommend it to students who speak that language. For those who want to learn Japanese while deepening their specialized knowledge, it is best to enroll in at the undergraduate level. Many of Japan’s universities only support classes and graduation theses in Japanese. But Waseda has English degree programs, you can use English both in classes and for your graduation thesis.
It may be that loneliness and anxiety are unavoidable when studying at a university abroad. This is not so much a concern at Waseda because there are so many foreign students. By going to the Intercultural Communication Center (ICC), where I work as a student staff leader, you can enjoy international cuisine at food events and make both Japanese and foreign friends at sports events. Take advantage of such opportunities to get the most out of student life in Waseda!