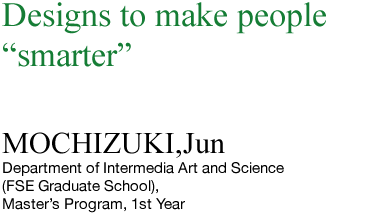 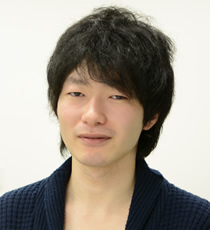 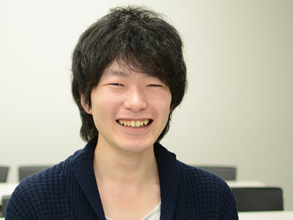 Q.Tell us about your research.

I am studying the nature of the relationship between machines and people, and what sort of design functions should be drawn from that relationship. Machines come in all sorts of forms, from robots and computers to devices such as household appliances.
With the rapid developments in the field of artificial intelligence, it seems likely that the majority of work currently performed by humans will soon be done by machines. Machines may even come to act for us in the realm of communications. Such developments also have a negative side that requires serious consideration. The American cognitive scientist D. A. Norman says that “machines must serve to make their users smarter, not to render then ineffectual.”
He is the author of a book entitled “Emotional Design,” in which he sets forth three points for designs to make people smarter.

Based on these observation, I think that design should not be swayed solely by usability, but be based on a perspective that keeps the essentials squarely in view.

Q.What do you mean specifically?

The freedom to do what appeals to you
Q.What was your reason for choosing the Department of Intermedia Art and Science?

I’ve liked the manual arts and drawing pictures since I was little, and when I heard about the Department of Intermedia Art and Science sometime during high school, I studied hard with the determination to enter.
Since I enrolled, my expectations have been fulfilled, and I’ve taken many interesting classes.
Professor Yabuno, the painter who teaches “Fundamentals of Artistic Expression,” gave us opportunities to critique movies after watching them, but he also left us with many memorable thoughts, such as “It’s never too late for a person to start something.”
In “Alternative Movie Production,” I made a documentary movie. There’s an urban legend making the rounds in the Science and Engineering school that “Building 51 is leaning.” Taking that as my theme, I did some research along with a series of interviews that allowed me to come to the conclusion that “Building 51 is not leaning.” So everyone who wants to join the school can do so without worrying about that! (laughs)

Q.What is the atmosphere like in the CHOH Laboratory?

The reason I chose the CHOH Laboratory is that I was attracted by the freedom to set my own research topic, and the research topics of the members are quite varied.
For example, one member is studying the effect of changing the color of eye shadow, another is studying piggyback advertising, and a third is building a wearable computer, so the topics and fields are quite varied.
If you’re a student who’s aiming for the Department of Intermedia Art and Science, you’re probably attracted by the idea of being able to study things that interest you. The CHOH Media Design Laboratory is a great place for that.