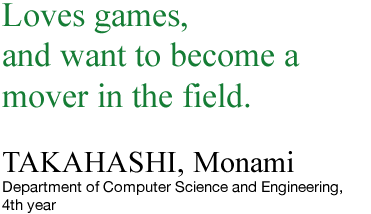 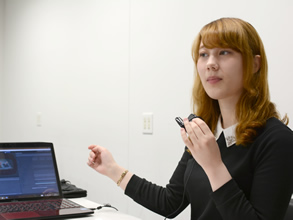 Q. What is your most memorable course?

That would be the course in computer architecture. In our programming course, we had an assigned topic and a free topic, and the one I took up first was the assigned topic, which was to “construct a tennis game.” The tennis game is a simple one that goes way back, where two players bounce a ball back and forth across the length of a court.
For my free topic, I thought that I could extend the tennis game, which I did by adding a quiz function to it. The result is something similar to playing the Japanese “shiritori” word game while playing ping-pong. It’s a simple thing, but everyone found it to be quite a challenge.

Q. Have you always liked games?

You could almost say I like games so much that I joined the Department of Computer Science and Engineering just so that I could do research on the subject! I also belong to a gamer club called MIS.W (link to http://misw.jp/nw/). MIS.W is divided into three teams that handle programming, music production, and computer graphics, and I work with the computer graphics team.
I study programming in the Department of Computer Science and Engineering, but in the future I would like to be capable in both areas as I want to work in game production.

A trading card game that makes use of augmented reality and virtual reality
Q. Have you made any other games in the course of your studies?

During the “Project Research” option that is available during the third year, there is an opportunity to get advance experience working in a laboratory of choice for half a year. During that time, I produced a game that combined augmented and virtual reality. It was an elaboration of the trading card game in which I used AR and VR technology to make characters appear on top of cards to do battle with each other.
The battles were viewed using an Oculus RIft head-mounted display to combine images of the actual location with images of the characters. This lent a sense of presence to the battles that let the viewer feel like they are actually present within the animation.

Q. What sort of problems did you encounter in producing this game?

I used a development platform called Unity to produce the game, but since the platform hasn’t been around long, the documentation hasn’t been completed. That made things difficult! There were also some instabilities in Oculus Rift operation that gave me headaches.
But these problems also made me feel like I was swimming in untried waters, and in that sense it made the project more interesting.

Looking to go global
Q. What other things are you doing beside your studies?

I am working on acquiring a mastery of English. My father is Irish, so I’ve been exposed to English a lot, but having lived in Japan all my life, it’s not as if I’d had the overseas experience. I make foreign friends and find various other opportunities to make use of English.
As it undertakes globalizing itself, Waseda is putting a lot of effort into English education, and there are many foreign students at the school. That’s also one of the things that makes Waseda attractive!