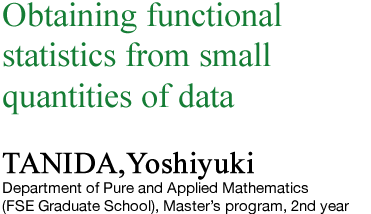 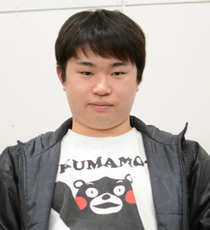 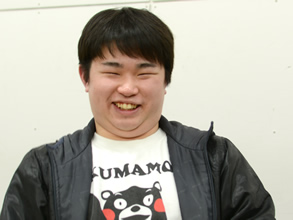 Q Tell us about your research.

My major is statistics, I am primarily studying higher-order data, and my research is focused on a method called The Lasso. When the quantity of data is small in comparison to the number of variables, the data lacks significance. The Lasso is a technique that can be employed in such cases.
Let me take genomes (genetic information) as an example. If you want to know the characteristics of the genomes of cancer patients, it is not easy to gain access to a large number of patients quickly, so available data may be very limited. At the same time, the number of ways that genes combine in human beings is practically infinite, so the number of variables involved is astronomical. In such cases, characteristics drawn from limited data would ordinarily be considered of low reliability. However, in actuality, some of the variables included in the data can be ignored. The   Lasso is a method for doing this that applies penalties to parameters used with techniques such as least-squares regression or maximum-likelihood estimation.
The Lasso has all sorts of applications, finding use a wide variety of areas, from genomes to finance, and from image processing to Internet data analysis. So-called “big data” is currently a topic of attention, and The Lasso finds application there also.
However, The Lasso does not work effectively with models that have data-dependent variables. And although the technique is straightforward, the amount of time required to converge on a result can be a problem. My research aims to resolve these problems.

Finding stimulation (?) in the enthusiasm of lab members . . . and the professor’s strict eye
Q. During your undergrad years in the Department of Mathematics, I understand you joined the Taniguchi Laboratory, which deals with the field of applied mathematics.

I’ve had a knack for math since my high school days, and while I did join the Department of Mathematics, I started developing an interest in probability statistics. Fortunately, mathematics and applied mathematics are both in the same department in graduate school, so changing majors wasn’t a problem.
I was a member of Professor Takeshi Suzuki’s lab during my undergraduate years, but Professor Suzuki has now retired, and partly for that reason I transferred to the lab managed by Professor Masanobu Taniguchi. I visited a number of laboratories before making the switch, but I found myself attracted by the high motivation of the members of Professor Taniguchi’s lab, plus the enthusiastic guidance of Professor Taniguchi himself, and before I knew it I found myself doing joint research announcements with his lab members.

A better university, and better opportunities
Q. Can you give us a message for high school students?

If you want to go to college, aim for a good school. This is particularly true for people who don’t yet know what they want to do. There was a time before I discovered the fascination of mathematics that I myself didn’t know what I wanted to do, and for a time was actually skipping classes. Seeing this, my friends provided me with all sorts of information. It was thanks to this that I encountered the discipline of Statistics and met teachers who I could respect.
Sometimes, life goals need more than willingness; opportunities are important, too. At good colleges you’ll find good teachers, as well as good friends, and that makes them places that are filled with opportunities. I think that all those conditions are present at the School of Fundamental Science and Engineering.
Also, you’ll need English ability for papers and presentations, as well as communicating with people from other countries, so pay special attention to that subject!