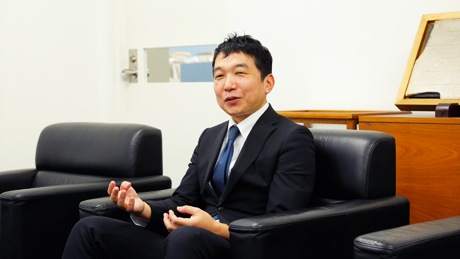 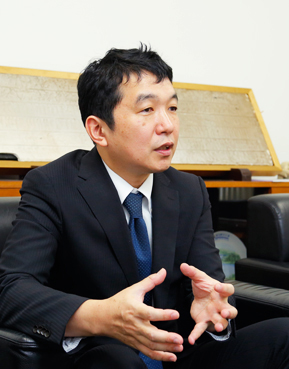 Ｑ Tell us something about the use of separate entrance examinations for the various departments and minor fields of study.
The School of Fundamental Science and Engineering is divided into three main areas of study, including mathematics, engineering and media imaging, each of which has its own admissions system. First-year students are regarded as belonging to all departments, rather than being assigned to a particular department. I think allowing a year for students to decide for themselves what field they are best suited gives them a big advantage. This goes beyond scholarship, making it possible for them to develop a network of friends that extends across different departments.
Students also highly appreciate the availability of minor studies, which allows them to take courses in any one of seven departments outside of their own major field. Such cross-disciplinary study gives students a leg up on developing capabilities needed to play a significant part in the global arena.
This curriculum flexibility helps students make the most of their studies, whether they have developed a particular focus in which seek to make a mark on the world, or are more interested in studying in multiple scholastic fields.
Ｑ I understand that you encourage students to study abroad at some point during their four years in their department.
This is based on the school-wide Waseda Vision 150 program, which involves organizing subjects so that students can graduate in four years even if they go abroad for study. Increasing internationalization makes it increasingly important for students to develop a global perspective. I have no doubt that contact with other brilliant students and faculty in the context of a foreign culture will lead to deeper insights.

Find Your Passion and
Give It Everything You’ve Got

Ｑ Can you give us a message for high school students taking entrance exams?
The university is a place where students who act proactively have access to a wide range of resources, including not only lectures, friendships, and archives of information, but a leg up on starting new enterprises. Whatever it might be, I hope that you will find something that you can be passionate about and pursue it to build a wide range of experiences. What you make of your four years as an undergraduate is really up to you, and the effort you put forth now will lead to rewards later in life.
In my own case, I became keenly involved with computer programming, which was a rapidly developing field during my time as an undergrad during the early ’90s. I made use of terminals at the school and the school library to do extensive studying on my own. The experience played a big part in forming the foundation of the person I am today.
While the entrance examination system that Japanese universities use is an effective gauge of academic ability, once you get out in the world, the diversity of life experiences that you have will become of dominant importance. I hope that all of our students will take advantage of the great environment at Waseda to prepare for launching themselves into a world where study alone will not suffice.