With all the problems that it faces in regard to global environment and energy, society hopes that wide-ranging scientific and engineering knowledge about the environment, energy, information, life and safety will be actively utilized in refining and revolutionizing science and technology. The objective of the Department of Applied Mechanics and Aerospace Engineering is to develop human resources who are capable of contributing to society by mastering broad, basic knowledge about the fusion of natural science and engineering, and of contributing to the creation of new scientific value and technological innovation. 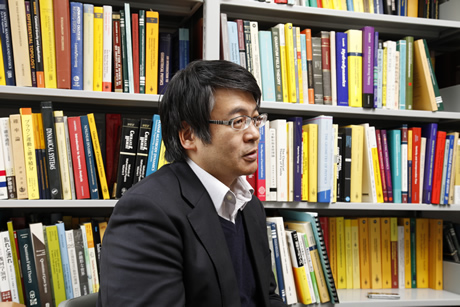 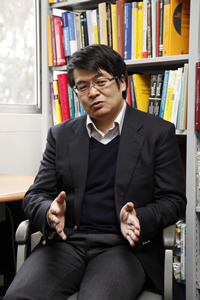 Q. Tell us the features of the Department of Applied Mechanics and Aerospace Engineering.

When we refer to “aerospace,” we mean not only fields of mechanical science such as systems, environment, energy, materials, and precision and micro-machining, but in looking ahead in the field of aerospace and space engineering. In other words, here in this one department it is possible to acquire overall learning that encompasses the entire range from the basics of mechanical engineering to leading edge fields of application such as aerospace engineering.
There are also labs that specialize in subjects like bioscience and applied mathematics, so you could say that this is the department that offers the widest field of study in the School of Fundamental Science and Engineering.
I specialize in application of applied mathematics to problems in areas such as space engineering, mathematical physics, and dynamic systems that are based on a foundation of mathematics.

Unified understanding of phenomena that appear to be completely different

Q. Could you tell us a little more about your specialty?

I specialize in dynamic systems theory, using differential equations to create analytical models of a variety of physical phenomena and engineering systems. I work with all sorts of physical phenomena, from fluid dynamics to robotics and design of spacecraft trajectories.
Are you familiar with the two-body problem? The motion of two stars in space will be affected by the gravitational influence that they exert on each other. That motion is defined by Newton’s equation of motion, and can be characterized as elliptical, hyperbolic, or parabolic.
However, when a third body enters the picture, the trajectory that is drawn is complex and unpredictable. This is the three-body problem.
My laboratory’s research involves use of analytical mechanics to formulate four-body problems involving the sun, earth, moon, and spacecraft, and making use of the characteristics of invariant manifolds called tubes to design spacecraft trajectories. This makes it possible to restrict fuel consumption, and enables missions that involve travel over long distances and time periods, such as that of the “Hayabusa.”
We also propose mathematical models for resolving the occurrence and transmission of shock waves that result from the collapse of bubble clouds generated during cavitation produced during experiments that are observed using high speed cameras. Cavitation is the phenomenon in which pressure differences in a flowing liquid cause the generation and extinction of microscopic bubbles. Although the bubbles generated exhibit a collective cloud-like behavior, when the cloud collapses, it generates a very powerful shock wave with a pressure of 20 to 30 atmospheres. This shock wave can destroy the screws and pumps of fluid machinery. This has been a contributing cause of H2 rocket failure.
At first glance, it might appear that designing trajectories for spacecraft and the phenomenon of cavitation are completely unrelated problems. One of the things that makes research into dynamic systems theory so interesting is that the same models and theories can be applied to both of these kinds of problems.

Aim for a “feeling” of deep understanding

Q. What expectations do you have of your students?

Many of the department’s students have a deep interest in applications involving aviation and space, and I would like them to treasure the fundament of that interest.
Every field has as its foundation the natural sciences such as mathematics and physics. As you go deeper into research, you gradually become able to understand how basic theories apply, and you become capable of grasping everyday phenomena in terms of mathematics and physical theorems.
This is the doorway to gaining understanding of the world “in abstract.”
It is only when you stand at this doorway that you become capable of transverse thinking. Once you get the sense of this, every piece of knowledge becomes a multiplier for further understanding. I would like every student to acquire the sense for such deep understanding.
The departments of this School are strongly linked, so your studies can be eclectic. We also conduct joint research in conjunction with institutions such as the California Institute of Technology in the United States, the École Normale Supérieure of France, and the Max Planck Institute of Advanced Studies in Germany. The framework of academia traverses borders, providing an opportunity for extensive mutual learning.
> Index